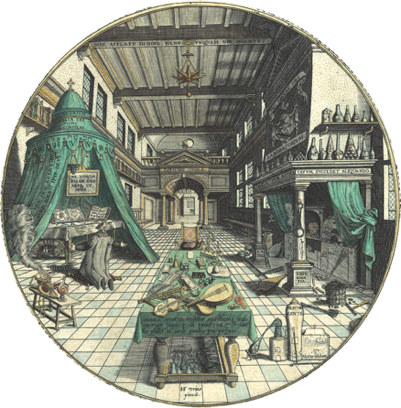 One of the best-known Rosicrucian publications is the Chymische Hochzeit or Chemical Wedding, published in 1616. On its cover it bears the words, “Arcana publicata vilescunt” (Mysteries made Public become Worthless), which seems a rather paradoxical statement on a book available for purchase by anyone with sufficient funds. Once the optimistic owner looked inside the book, however, and engaged with the highly symbolic language of the story, perhaps they understood that even when published, some works still retained their air of enigma and mystery. The title page phrase originally appears in an alchemical work by the German alchemist, magus, and theosopher Heinrich Khunrath (1560-1605), whose Amphitheatre of Eternal Wisdom (1595/1609) is one of the treasures of the Bibliotheca Philosophica Hermetica collection at the Allard Pierson Museum. In this session of the History of the Book Summer School we shall look at some of the influential alchemical works that communicate ideas through symbolic images, beginning with the earliest published alchemical image sequences, the Pretiosa Margarita Novella (1546) and the Rosarium Philosophorum (1550), Khunrath’s Amphitheatre (1609), and then works that contributed to the Golden Age of Emblematic Alchemy in the 17th century, in works by Michael Maier, Johann Daniel Mylius and Daniel Stolzius von Stoltzenberg

Prof. Peter J. Forshaw is Associate Professor in History of Western Esotericism in the Early Modern Period at the University of Amsterdam’s Center for the History of Hermetic Philosophy, where he specialises in the intellectual and cultural history of occult philosophy (in particular alchemy, magic, and Christian cabala) and its relation to religion, science and medicine. He is also Head of the Ritman Research Institute at the Embassy of the Free Mind, Amsterdam, where he works on the Geheime Figuren and Teaching by Images projects.